There were many people and groups who opposed the Franklin Delano Roosevelt's New Deal.  Huey Long, an early supporter of FDR, turned against him and the New Deal claiming that it was too beholden to big business.  Father Charles Coughlin was another early Roosevelt supporter who later turned against his reforms.  And, the United States Supreme Court, from time to time, found some of the largest New Deal programs to be unconstitutional, resulting in an interesting backlash by Roosevelt. 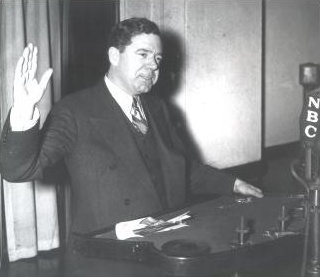 Because of his "creative" methods of financing public works projects in Louisiana, he was barely in office a year before he was investigated by the IRS and survived an impeachment attempt.  In 1930 he became a Senator to Washington DC, where "he gave himself the nickname 'Kingfish' because, he said, 'I'm a small fish here in Washington. But I'm the Kingfish to the folks down in Louisiana.'" (9)  "He was a vocal supporter of Franklin Delano Roosevelt in the 1932 election, but when Long was not offered a federal post he turned against him." (4)

The Kingfish came to oppose the New Deal because, as he saw it, it was too generous to the corporate interests which he claimed to despise.  The administration claimed that what was good for business was good for America, but Long spoke directly to his constituents with his "Share Our Wealth" plan.  This greatly appealed to the majority of people voting for him in Louisiana, among the poorest in the nation, as it was a plan to strip the very-rich of their fortunes and redistribute it to the masses.   (10)  It had the added benefit of showing the people that he too had a plan to ease the suffering caused by the Great Depression; no man would be taken seriously in a Depression era presidential election unless he was seen to have a plan.  The New Deal had many "Relief" style programs meant to put a few dollars in the pockets of the unemployed, but it also paid much attention to "Reform" and "Recovery" aspects that some could interpret as a form of "corporate welfare."  Long's plan was relief, recovery and reform in one shiny, socialist box.  He and his ideas were very popular in his home state, but it is unknown whether his ideas would have been embraced on a national level, as he was assassinated a month after announcing his bid to run against Roosevelt in the 1936 presidential election. (4) 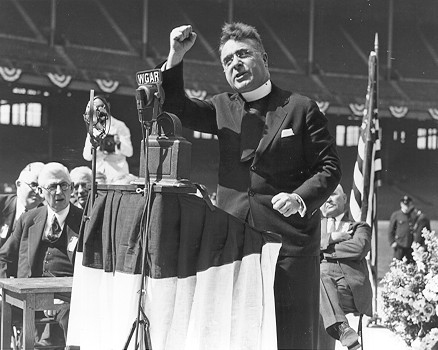 Charles Coughlin was born October 25, 1891 and answered the calling to become a Roman Catholic Priest in Royal Oak, Michigan.  (5)  He was a man so strongly led by his faith that it became as blinders to him, giving him a very narrow view of the world.   Like Long, he was an early supporter of Roosevelt in 1932, but for very different reasons.  Coughlin had so strongly criticized Hoover that he lost his radio broadcasting contract with CBS in 1931. (11)  What also endeared Roosevelt to Coughlin, early on, was a biblical quote Roosevelt made in his inaugural speech to "drive the money changers from the temple," an allusion to monetary reform, a core part of Coughlin's message.  "Roosevelt's early monetary policy seemed to fulfill this promise and so Coughlin viewed him as the savior of the nation. But when FDR failed to follow-on with additional radical reforms, Coughlin turned against him. By 1936, he would support a third-party candidacy against FDR's reelection bid and would even say this of Roosevelt:

Coughlin had vowed to go off the air if his endorsed Union Party candidate, William Lemke, received fewer than 9 million votes, and he actually did cease broadcasting for a short while when Lemke received less than 1 million.  He seems to have either come unbalanced at this time, or he did some serious soul searching, or just changed his methods for tactical reasons; for when he returned to the airwaves he was a very different person.  "In 1937, he returned to the airwaves with a vengeance, attacking the New Deal as a Communist conspiracy and Roosevelt as a dictator. In the next year, he added anti-Semitic remarks to his diatribes and expressed sympathy for Germany and Italy's Fascist regimes." (13)  In one speech he implied the the days of the reign of Roosevelt were the darkest days since the "assassination" of Christ, a sleight both to the sitting president and to Jews.  His more and more radical style managed to alienate the coveted "middle" of his American audience, and his popularity - and the popularity of his ideas - waned, and his radio program was cancelled.  "After the Japanese attack on Pearl Harbor, Coughlin was ordered by his bishop to cease all political activity." (13)

One source of opposition that must have been a surprise to Roosevelt came from within his own government in the form of the Supreme Court.  Roosevelt inherited a nation in dire straights.  Up to 30% of the country was unemployed.  Banks, businesses, and factories were closing at astonishing rates.  The economy was in a downward spiral with seemingly nothing to stop its descent.  Human nature attributed to the continuing problem as much as economic law did; Hoover's "Volunteerism" may truly have been effective if any single business owner was willing to gamble real money that his competitors would, too, and thereby throw away the most basic principles of market competition.  The long suffering farmers may truly have been able to solve their own problems if they could have trusted each other to reduce crop production and thereby reduce supply and raise prices for their goods.  However, everyone did what was immediately in their own best interests, which was ultimately their undoing.

Enter 1932, a new president, and a New Deal.  Roosevelt and his Brain Trust knew the nation was breaking, both economically and psychologically.

Recovery and reform plans were relatively easy to put into place, but immediate relief plans were a little trickier; there was the element of human pride with which to contend.  Not many people were content to take a "hand-out."  A man wanted to work, and earn his keep; but at times he also needed to swallow his pride and feed his family any way he could.  Immediate relief was needed, however, and some came in the form of assistance to farmers, and imposition of national control over businesses.

One of the cornerstones of the New Deal, the Agricultural Adjustment Act was an attempt to aid farmers by forcing them to destroy crop surpluses and reduce  production in exchange for financial aid.  The theory was that reduced supply equated to higher crop prices at market.  The aforementioned financial aid to the farmers came from a tax imposed at the food processing level by food processors.  "In 1936 the Supreme Court declared the AAA unconstitutional. The majority of judges (6-3) ruled that it was illegal to levy a tax on one group (the processors) in order to pay it to another (the farmers). In 1938, another AAA was passed without the processing tax. It was financed out of general taxation and was therefore acceptable to the Supreme Court." (16)  The Supreme Court also declared the National Industry Recovery Act unconstitutional, claiming the federal government had the right to regulate intrastate commerce, and it also overturned a handful of other programs Roosevelt had put into law.  In response, Roosevelt attempted his ill-fated "Court Packing" amendment to the Constitution.  "President Roosevelt's response to all of this was stunning and unexpected. On February 5, 1937 he sent a special message to Congress proposing legislation granting the President new powers to add additional judges to all federal courts whenever there were sitting judges age 70 or older who refused to retire. Couching his argument as a reform to help relieve the workload burden on the courts, President Roosevelt's unusually blunt language made it clear what he really had in mind:

This is seen as possibly the darkest moment in Roosevelt's political history, as his Court Packing plan was seen as directly subversive to the checks and balances of the democratic process.  This was soon put in the back of the nation's mind, however, as attention was drawn overseas in the flickering flames and shattering glass of a new world war.

Franklin Roosevelt was put into the Oval Office to get the country back on its feet, and through the New Deal he changed the nature of the federal government more than any president before or since.  The New Deal had its supporters and detractors, but few individuals had louder voices of dissent than Huey Long and Father Coughlin.  Roosevelt sometimes responded to opposition with compromise by adopting part of their ideas in order to take the fire out of the opposing arguments.  Other times he attempted to meddle with the Constitution to, essentially, change the law for his own purposes.  Although the New Deal ultimately failed, the fact that many of the New Deal programs still exist today is a testament to Roosevelt's genius and vision.

15 Constitutionality of the Social Security Act

Other reading done for this project:

14 US Government, the Agricultural Adjustment Act of 1938