Stuff we should click on.  Be sure to state Not Work Safe, if applicable.  KTHX.
Post Reply
47 posts

They deserve their own thread now.

Clearly republican operatives. With the masks there's no way to be sure.
Fuuuuuuck YOU.
Top
GORDON

I had no idea who these people were before now. I just kept assuming it was people named "Anita" who sucked at spelling or had a speech impediment.
Diogenes of Sinope: "It is not that I am mad, it is only that my head is different from yours."
Arnold Judas Rimmer, BSC, SSC: "Better dead than smeg."
Top
Malcolm

I've seen nothing from violence from that group. The name is clearly ironic.
Fuuuuuuck YOU.
Top
GORDON

Leisher wrote:Source of the post Berkley mayor says they should be classified as a gang.

Yeah, but then he ordered his police not to engage with them once they became violent. So he's not too concerned with defending anyone not a leftist. The mayor is a garbage mayor.
"... and then I was forced to walk the Trail of Tears." - Elizabeth Warren
Top
Vince

I'm pretty sure that also got pointed out. If not there, in the hundred other links on the story where I pulled that one.
“I'm proud to introduce our new head coach, Mike Tomlin”
― Dan Snyder
Top
Leisher

Hey show me pics of Antifa organizing and helping out in Houston.
Fuuuuuuck YOU.
Top
GORDON

GORDON wrote:Source of the post Hey show me pics of Antifa organizing and helping out in Houston.

So a few days ago a kid committed suicide by cop on the campus of Georgia Tech. Reports indicated he had a gun and a knife. He approached officers with the knife and demanded they shoot him. He ignored their warnings and let him well within the distance (8 feet) they are trained to shoot (21 feet). He was a LGBTQ leader, and this bummed out a lot of folks. However, NOBODY involved was blaming the campus police. The people who knew him said he had mental issues and this was an unfortunate result.

So they held a candlelight vigil to honor the troubled young person.

Well, someone was blaming the police...

Family attorney L. Chris Stewart said Schultz was barefoot and "disoriented" and in the middle of a "mental breakdown." The lawyer accused Beck of overreacting.
"It's tragic that as Scout was battling mental health issues that pushed them to the edge of desperation, their life was taken with a bullet rather than saved with non-lethal force," Stewart said in a statement.

Gasp! A lawyer, who is assuredly working on a civil suit that's sure to buy him a vacation home, suggests that the cop could have done more?

But hey, at least you got Antifa out of the conversation.
“I'm proud to introduce our new head coach, Mike Tomlin”
― Dan Snyder
Top
Leisher

These people that soft peddle Antifa are ignorant of history.
"... and then I was forced to walk the Trail of Tears." - Elizabeth Warren
Top
Vince

How could we be ignorant of history? We have all these statues and shit reminding us.

Pretty good video even though it was made by some right wing guys. It shows just how far Antifa is willing to go, and why they should immediately be labeled a terrorist organization. It also displays how the left leaning media outlets don't want to report on it. I mean the guys, literally, offer to hand them the video of antifa leaders discussing violent tactics and handing out illegal weapons, and they declined.

Hell, just searching for "undercover in antifa" on YouTube and you'll see a shit ton of videos of people going undercover in antifa and the theme is always the same. They're violent.
“I'm proud to introduce our new head coach, Mike Tomlin”
― Dan Snyder
Top
Leisher

The people who made the videos will be prosecuted.
Fuuuuuuck YOU.
Top
GORDON

So violence is fine to quell any ideology or message you don't agree with? Do they know what fascism means?

George Takei posted this one on his FB feed and there are tons of people defending Antifa because "they're attacking Nazis". While I support the dismantling of Nazis, the shortsightedness and lack of perspective these people have is stunning.
“I'm proud to introduce our new head coach, Mike Tomlin”
― Dan Snyder
Top
Leisher 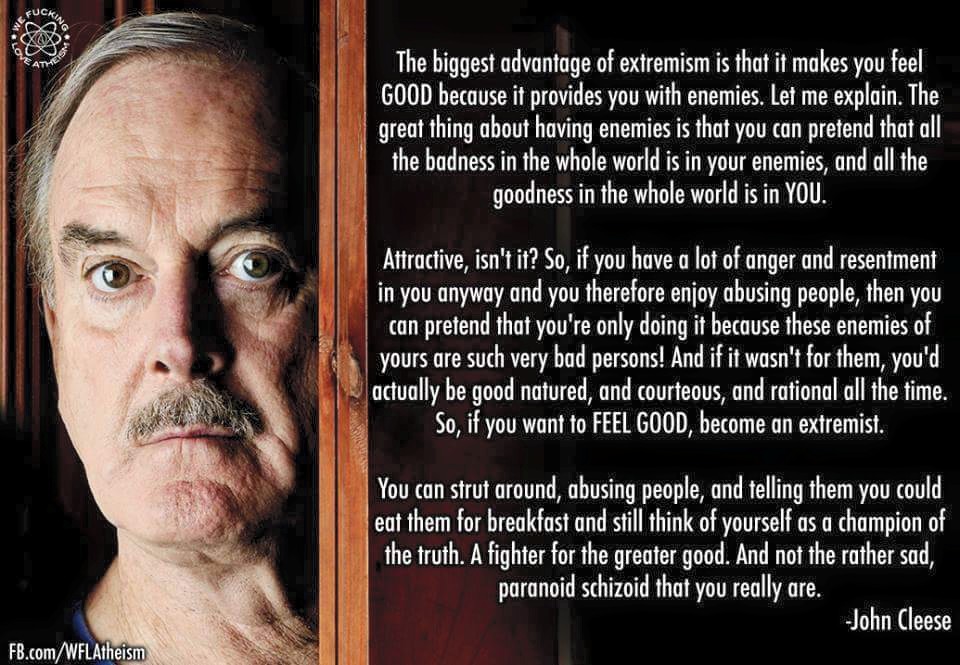 "The Free Speech Movement is dead, and the left has killed it."

"... and then I was forced to walk the Trail of Tears." - Elizabeth Warren
Top
Vince
Post Reply
47 posts

Users browsing this forum: No registered users and 4 guests