The Maple Sap batch of beer

TPRJones wrote:Oh, neat, does it produce grapes? Can you make wine?


Yes, and yes. I made grape jelly last fall... it is awesome.
Fuuuuuuck YOU.
Top
GORDON

Last time I saw a vine that big was in my pants.
It's not me, it's someone else.
Top
TheCatt

Batch is brewed and in the bucket. No bubbles yet after 18 hours.

The original gravity was high, I didn't think about why when I was trying to get it in range. It's because water has, I believe, a gravity of 1... but I wasn't using water. I hope I didn't add too much additional sap trying to get it in range. I typically get 4.5 gallons before I hit the gravity range, this time I went to 5 gallons before I stopped, and it was still a little high.

So.
Fuuuuuuck YOU.
Top
GORDON

Wait ... you're making this into beer?

Dude. First 5 gallons were to make beer. Still collecting and should have shitloads for syrup by the end of the season.

And how is it disappointing? Have you ever had beer that came out of a tree before?

GORDON wrote:Have you ever had beer that came out of a tree before?

I got to get me a seed from that tree.
Fuuuuuuck YOU.
Top
GORDON

I never knew that sap had to be reduced/boiled so much to be syrup. Guess that explains why it's so watery looking to begin with. I kinda always thought it just magically came out more syrupy.
It's not me, it's someone else.
Top
TheCatt

I never knew that sap had to be reduced/boiled so much to be syrup. Guess that explains why it's so watery looking to begin with. I kinda always thought it just magically came out more syrupy.


50 or 60:1 ratio, is what I read, depending on the species of the maple. I would need 60 gallons of sap to make a gallon of syrup. That's why the pure stuff at Kroger is so expensive.
Fuuuuuuck YOU.
Top
GORDON

I just googled maple sap beer for the first time.... prolly should have done a little research ahead of time instead of getting an idea and just making it up as I went along.

Sap is a flavorless, colorless, and aroma less water. It will elevate your starting gravity and give you slightly more alcohol. I usually take a hydrometer reading for my notes. I've had sap as low as 1.012 and as high as 1.018. The sap can be substituted for water in the boil. If you decide to do an all sap brew, then you should pre-boil and chill the sap that you plan to use for topping off in the fermenter.

Looks like I nailed the process, though. Here's my primary boil and my top-off boil to sterilize it right along side. 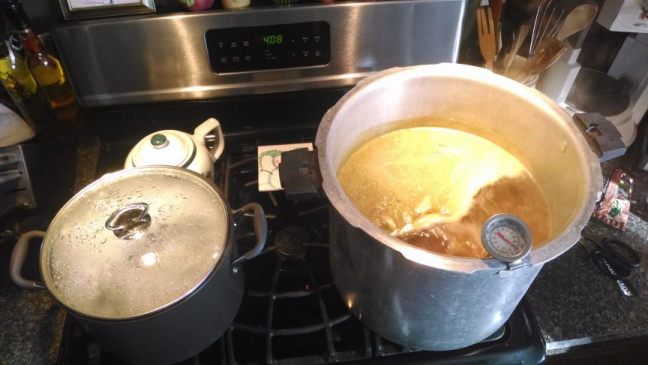 I boiled and chilled the top-off sap to kill any wild yeast that may have been introduced during the collection phase. Winter out, but I guess you never know.

One can just boil 4-5 gallons all at once, but it can be difficult to boil that much volume on a home consumer stove. I could probably handle it... I have a gas stove and I am boiling 3 gallons, there, but whatev. The important thing at the end is that you get the gravity in the correct range at the end when you are topping it off. You typically add all the water you want at the end, and as long as it is in that gravity range then it is correct.

GORDON wrote:And how is it disappointing?

GORDON wrote:And how is it disappointing?

How is it not?

There is no such thing as a good beer.


Did cakedaddy hijack your account? He once told me that the only reason people think they like the taste of beer is because of conditioning and peer pressure.

I won't argue that point, but I will tell you that I had a buddy who hates the taste of beer, but then he had a taste of my Scottish ale homebrew and said, " wow.... I could actually drink this...". And he drank about half of it.

I've tried homebrew. I've tried some homebrew that multiple people told me is the best beer they have ever put in their faceholes. It still tasted exactly like Coors - and every other beer - to me.

I feel the same way about coffee, tea, and wine. All worthless awful dreck.

Syrup is that artful, to you? There's nothing to the process.... Just boil that shit.
Fuuuuuuck YOU.
Top
GORDON

It still tasted exactly like Coors - and every other beer - to me.

Ouch. If every beer tasted like Coors, I'd solely consume hard liquor.
Diogenes of Sinope: "It is not that I am mad, it is only that my head is different from yours."
Arnold Judas Rimmer, BSC, SSC: "Better dead than smeg."
Top
Malcolm

Apparently maple sap beer was invented in Vermont in the 50's.

But to me it was an original idea, so I consider myself a visionary.

I'm torn... When I started drinking, I tried beer and didn't like it, so I mostly drank liquor if I was drinking from something I paid for. On the other hand, there was so much free/cheap beer at parties, that eventually I drank a lot of beer and grew to like it. But my favorite beers I didn't discover until late college/after college. But did I like those because of the other beer I grew accustomed to? Did it just help? Who knows.

I also like wine. But hell if it's ever worth $20/bottle+ to me, except ice wine. That stuff is the shit.
It's not me, it's someone else.
Top
TheCatt

According to my mother it is very easy to get an excellent bottle of wine for $9 these days.
Fuuuuuuck YOU.
Top
GORDON
Post Reply
68 posts

Return to “Fermentation, Distillation, and/or Intoxication”

Users browsing this forum: No registered users and 3 guests