Leisher wrote:Source of the post They constantly complain about it, but when it comes time for action they do nothing. If the world told China, "Stop spying on us or we're done doing business with you" China might actually have to make changes.

Right? Where's Europe in all this shit?
It's not me, it's someone else.
Top
TheCatt

I think the problem is that we produce about 50% of the advancements in tech in the world. So the other countries aren't losing as much as us, and also are paying less for the knockoff's that come from our companies getting their shit stolen. They have no incentive.

And our companies are not without guilt. They are told on the front end that they have to allow access to the Chinese government as a condition of doing business there. I can give the early adopters a break, but when they do it now, they know what they're doing. The cheap labor and lax EPA rules are just too enticing.
"... and then I was forced to walk the Trail of Tears." - Elizabeth Warren
Top
Vince

Trump spoke just minutes after Pelosi and Senate Minority Leader Sen. Chuck Schumer were supposed to be meeting with him to find common ground on infrastructure.

"There's was no collusion, no obstruction. We've been doing this since I've been president," he said.

Trump said he told Pelosi and Schumer: "I really do but you can't do it under these circumstances... get these phony investigations out of the way."

Pelosi had emerged from a closed-door meeting with all House Democrats on Wednesday morning , iincluding a growing number pressuring her to move forward with an impeachment inquiry, saying, "We believe that no one is above the law, including the President of the United States. And we believe the President of the United States is engaged in a cover-up."

TheCatt wrote:Source of the post We believe that no one is above the law

Let's be honest, the left out qualifier is "unless they're a Democrat". (Reverse the parties/person saying it, and it would still be true.)

I honestly don't know who I hate more at this point, Trump, the Dems, or the MSM.

Although, in this case, Trump's move is probably the smart one. If he's innocent, it's 100% the right move. He's probably sick of being accused and should he really be trying to negotiate with people hell bent on wasting tens (hundreds?) of millions just because they lost to him? If he's guilty, it's also the right move. It's a gambit to get them to drop the investigation during a time when voters, on both sides of the aisle, are sick and tired of hearing about it (per polls). Plus, it's a bribe without actually being a bribe. Getting something done is what they can campaign on.
“I'm proud to introduce our new head coach, Mike Tomlin”
― Dan Snyder
Top
Leisher

He isn't wrong. Obstruct to the end.
Fuuuuuuck YOU.
Top
GORDON

If it keeps them from spending $1.6T, let's have an impasse.
It's not me, it's someone else.
Top
TheCatt

TheCatt wrote:Source of the post If it keeps them from spending $1.6T, let's have an impasse.

Either way, they're wasting money.

At least one would give some folks jobs.
“I'm proud to introduce our new head coach, Mike Tomlin”
― Dan Snyder
Top
Leisher

Just in case you were still under the delusion that only the right had the crazies:

Leisher wrote:Source of the post Just in case you were still under the delusion that only the right had the crazies:

Another term would be propaganda. To be fair, I’m pretty sure there were lots of pro Obama movies.
Top
Troy

Leisher wrote:Source of the post Just in case you were still under the delusion that only the right had the crazies:

Another term would be propaganda. To be fair, I’m pretty sure there were lots of pro Obama movies.

There were indeed pro and anti Obama movies. Ditto for Hillary, Bush, Etc.

I just don't like when they're released during an election cycle. We have laws insisting upon equal time for candidates, but that is a loophole.
“I'm proud to introduce our new head coach, Mike Tomlin”
― Dan Snyder
Top
Leisher

I'd like to see a movie that goes into the crazies on each side... and the people who only pretend to be crazy, to make a side look bad.

People are garbage, and they do garbage things.
Fuuuuuuck YOU.
Top
GORDON

Mueller: We didn't charge Trump because it's not allowed against a sitting President; It's up to Congress

"If we had confidence that the president did not commit a crime, we would have said so," Robert Mueller said in his statement on the Russia probe.

To be fair, he didn't say that Trump wasn't charged only because it wasn't allowed. Also, he said that Barr acted in good faith with the release of his report. I'm sure exactly 0 CNN and MSNBC reporters will be asking democrats if they owe Barr an apology for their unfounded criticism of him.
"... and then I was forced to walk the Trail of Tears." - Elizabeth Warren
Top
Vince

Dems blasting Trump for Air Force One usage, which is what he blasted Obama for...

You're all assholes. All of you, please fuck off.
“I'm proud to introduce our new head coach, Mike Tomlin”
― Dan Snyder
Top
Leisher

I think the president using the president's plane is pretty low on the list of issues America has...
It's not me, it's someone else.
Top
TheCatt

I would agree that hostile media doing their best to help their side win is a bigger problem.
Fuuuuuuck YOU.
Top
GORDON 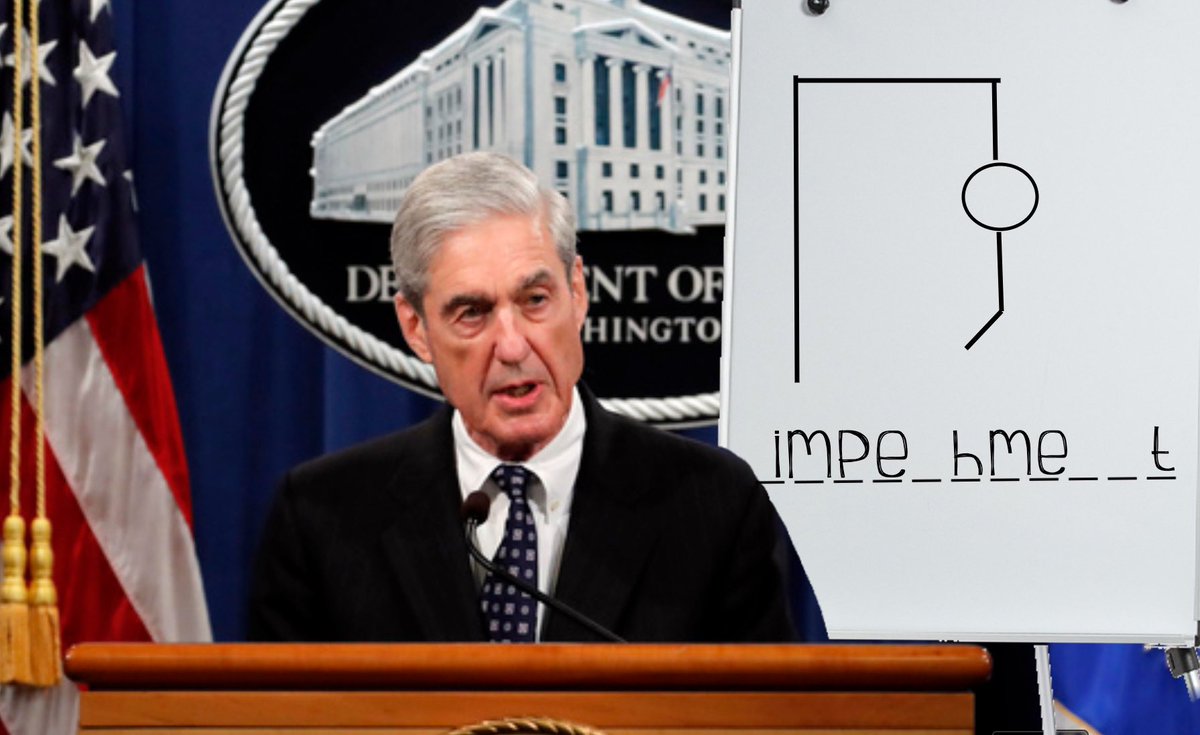 Everyone is looking for secret messages in his presser. I think on both sides it's wishful thinking. I think he had the presser to answer questions he anticipates would be asked in front of congress and to let everyone know he didn't have anything to say beyond what's in the report, so don't bother asking him to come testify and leave him alone he's retired again and headed to the beach.

I really think he hurt the impeachment odds. Right now the "should they impeach" question is running about 55-45 against. I think Democrats were hoping to have hearings where Mueller would testify to gin up interest and stage some leading and framing questions and get a few points to tip the scale. I think Mueller just ensured that no one that isn't already set in an opinion on it will really care about the hearings. So barring some new revelation, I think going the impeachment route will be a loser for Democrats.
"... and then I was forced to walk the Trail of Tears." - Elizabeth Warren
Top
Vince

The public has already said they're sick of it.

If the Dems go through with it, it will cost them votes in the next election cycle. An election that already should have them sweating because Chester the Molester is their frontrunner, who is a scandal away from being Bill Clinton part 2, and two candidates (Sanders and the Starbucks guy) have already said they're running independently without the Dem nod.

Even if it works you get rid of Trump, but now you have President Pence and an energized Republican party who will want revenge.

The smart play is to let Trump serve the remainder of his term, beat him in the election, and then investigate.

I haven't even mentioned the implications for Obama as he came out looking really bad in the Mueller Report.
“I'm proud to introduce our new head coach, Mike Tomlin”
― Dan Snyder
Top
Leisher

Agree.
"... and then I was forced to walk the Trail of Tears." - Elizabeth Warren
Top
Vince
Post Reply
3354 posts

Users browsing this forum: No registered users and 6 guests